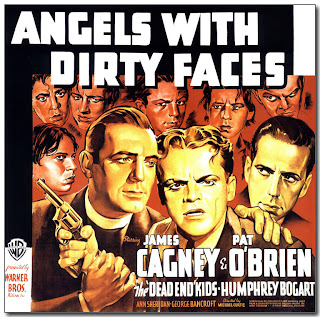 For Rocky, the years of meditation transform him into a hardened criminal with a bitter grudge and destiny to fulfill. For Jerry, the prospect of becoming a career criminal is enough to scare him straight into the priesthood.

The years pass and Rocky and Jerry are once more reunited; this time in their old neighborhood but on opposite sides of the law. In a sort of Father Flannigan twist, Jerry desires to have a positive impact on the lives of children who, like his former self, are on the fast track to nowhere. Rocky resurfaces as a ghetto gangster, exploiting Jerry's acquired goodness to suit his own end.

The Dead End Kids, a troop of street urchins who became model citizens through celluloid worship and pop culture are in this one to - playing themselves for either saintly salvation or sinful self-destruction. Rapid gunfire results from Warner warhorse director, Michael Curtiz, in top form.

Warner Home Video’s DVD is quite impressive. The gray scale is nicely balanced. Film grain and age related artifacts are present but do not distract. Fine details are fully realized. Whites are clean. Flickering and shimmering occurs during several key scenes. The audio is adequately balanced in mono. A featurette, commentary by historian Dana Polan and Leonard Maltin's hosting of "Warner's A Night At The Movies" are the extras.