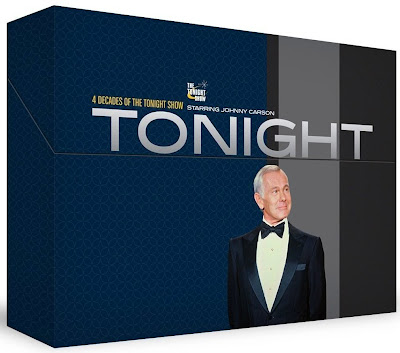 In 1962, brought on by contractual disputes and several ill timed emotional outbursts from its then host Jack Paar, NBC made the auspicious decision to recast its live New York late night variety hour with failed talk show, but moderately successful game show, host Johnny Carson. Late night TV would never be the same. Assuming the reigns in October of that year, the revamped Tonight Show hit the ground running - with a new theme supplied by Paul Anka and buoyantly orchestrated by Doc Severinsen, as well as Ed McMahon's trademark "Heeeeeeer's Johnny!"

The Tonight Show's format, though simple, proved effective with Carson often making weak, and even bad, jokes seem like the height of chic good taste during his opening monologues before swinging a phantom golf club to kick off a round of interviews and performing acts.

To say that Carson elevated camp to high art would be an understatement. Over the next two decades he introduced television audiences to such beloved chestnuts as cantankerous busybody Aunt Blabby, turban wearing clairvoyant Carnac the Magnificent, and, loveable ham Art Fern. And, of course, there was Carson's superb multiple cameos as President Ronald Reagan throughout the 1980s.

However, there was also a streak of meanness about the Carson mystique, particularly during the 1970s when on camera barbs swapped with Ed McMahon frequently turned sullen about their mutual drinking, carousing and multiple lady friends and wives. During Sept. 26th, 1974's broadcast featuring Dom DeLuise, Burt Reynolds and Art Carney, Carson used DeLuise's simple magic act involving real eggs to start a raucous food fight, rubbing whipped cream on Reynolds leather pants. It all seems to have been in great good fun, but in hindsight some genuine bitterness shines through.

Carson had his share of legitimate feuds; some played for spectacle on The Tonight Show, others leaked in private. Frequent jokes made by Carson about Wayne Newton's alleged homosexuality resulted in a near physical altercation between the two backstage. An ongoing love/hate relationship between Carson and comedian Don Rickles resulted in Carson unexpectedly dunking a fully clothed Rickles in a tub of water during one of his skits; a bit of improv that did not amuse the bedraggled Rickles.

Finally, there was the instance when Carson embarrassed comedian David Letterman by having his beat up pickup truck towed from his Malibu property. The incident was later ironed out in a follow up episode where Judge Wopner mediated the return of the vehicle to Letterman.

In hindsight The Tonight Show's ultimate strength and staying power lay in its ever-evolving roster of guests; a blisteringly eclectic myriad of Hollywood legends, up and comers, sports stars, politicians and beloved animal acts whose interactions, both with Carson and other featured guests on the same episode, made for compelling conversations around the water cooler the next day.

Originally, The Tonight Show began at 11:15pm and ran for 90 minutes. But by 1972, that had been pared down to the more manageable hour format with Carson offering Monday to 'guest' hosts. Among these, comedian Joan Rivers became the most 'permanent' fixture until she was offered her own show in 1986, causing a permanent rift between Rivers and the king of late night.

On May 22, 1992 Johnny Carson retired from The Tonight Show after a week's worth of farewell episodes culminating with long time friends Robin Williams and Bette Midler providing a stellar close to his guest roster, and a solitary 'goodbye' episode that simply featured Carson with Ed and Doc schmoozing about their collective tenure.

"And so it has come to this," an emotional Carson concluded, "...I have enjoyed every single minute of it...I can only tell you that it has been an honour and a privilege to come into your homes all these years and entertain you, and I hope when I find something that I want to do, and I think you would like, and come back, that you'll be as gracious in inviting me into your home as you have been. I bid you a very heartfelt goodnight."

Johnny Carson may be the undisputed 'king of late night' but you would never guess it judging by the utterly miserable slap dash treatment he has received from R2 Entertainment - the company that currently controls the rights to The Tonight Show. Tonight: 4 Decades of The Tonight Show starring Johnny Carson is the company's latest venture in a series of misfires.

This latest instalment to the Carson legacy is, frankly, an embarrassment! Fans continue to get spliced together episodes rather than complete broadcasts - heavy-handedly Ginsu-ed by someone who clearly does not understand the basic concepts of editing.

These reconstituted snippets vaguely resemble something of the complete episodes as they originally aired. However, many of the clips included in this box set simply fade to black, often in the middle of an interview. Consider December 17th, 1985's episode featuring Bette Midler that also promises a Christmas medley from Doc and the orchestra, who have been ostensibly preparing it over the last 20 years. After Midler offers a sumptuous musical rendering of the Johnny Mercer classic, Skylark the rest of her interview simply fades to black before we move on to the next episode featuring Billy Crystal and Buddy Rich.

As an ardent fan of Carson and his guests, this critic also cannot say that I'm a fan of the omission of such Tonight Show main staples as comedian Buddy Hackett, Bette Davis, Richard Pryor and James Stewart from this box set, particularly since their absence has been filled by some truly forgettable interviews from Bob Uecker, Doris Day, Burt Mustin and Maude Tull.

Worse than the omissions is the fact that these current discs have been mastered with a severely distracting digitized moire and strobe pattern. This imperfection in the video quality is not a part of the original broadcast quality, and brief clips on line from this box set do not contain such distractions which suggests that in the stamping of these discs a compression/authoring error has occurred.

Little, if any, attempt has been made on the part of R2 Entertainment to stabilize colour and contrast to acceptable levels. Color bleeding is prevalent throughout - occasionally excessive and distracting. The results of all this disregard for the Carson legacy is an image so heavily digitized and visually unstable that it makes many of the episodes unwatchable.

The audio is predictably strident during the earlier episodes and more 'refined' - if that word can be used - during the later 1980s and 90s episodes. This set also comes with over an hour of footage 'rescued' from the Tonight Show's 1960s tenure - slapped together in haphazard succession and with even less attention paid to preserving the integrity of the image quality than on the rest of the episodes featured in this box set.

We also get brief recollections from Loni Anderson, Baxter Black, David Brenner and Jim Fowler - gushing over their respect for Johnny Carson. Despite being advertised as containing all new content, there is some overlap in this box from the previously released 'Here's Johnny' box set.

What a shame and sham! The advice from this long time Carson fan is regrettably, "DO NOT BUY THIS SET! IT IS A WASTE OF MONEY!