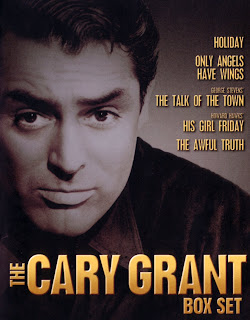 After soaking the paying customer with exorbitant prices for their lackluster and bare bones DVD transfers of classic releases it appears as though Columbia/Tristar Home Video (newly christened as Sony Home Entertainment) has had a change of heart – or, at the very least, a change of marketing strategy – with their release of The Cary Grant Box Set; a five disc compendium that exemplifies the very best work done by the actor under the old Columbia Pictures banner.

The set includes the screwball classics The Awful Truth (1937), His Girl Friday (1940), The Talk of the Town (1942), the more serious Only Angels Have Wings (1939) and the never before released to DVD, Holiday (1938) – a trifle that is quaint and charming, if not up to the level of artistic standards set by the rest of the films included herein.


Leo McCarey’s The Awful Truth (1937) is a truly outstanding screwball comedy. Jerry (Grant) and Lucy Warriner (Irene Dunne) divorce on a whim, then spend the rest of their time trying to get back together. The reason for the split: Jerry suspects that Lucy was having an affair with her music teacher, Armand Duvall (Alexander D’Arcy), even though the film hints that it is he, Jerry who was the one being unfaithful from the start. 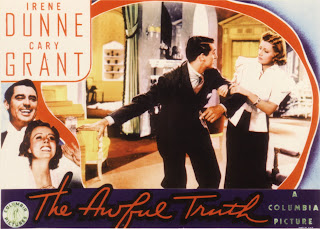 Lucy attempts a static romance with foppish mama’s boy, Dan Leeson (Ralph Bellamy again). But Dan’s mother, (Esther Dale) isn’t convinced that Lucy and Armand are ‘not’ an item. Meanwhile, Jerry tries his hand at seducing a nightclub singer Dixie Belle Lee (Joyce Compton), a move that leads to one of the all time great burlesque comedy numbers ‘My Dreams are All Gone With The Wind.’


Failing that attempt, Jerry next becomes entangled with the stuffy socialite, Barbara Vance (Molly Lamont). However, that amour is laid to rest when Lucy appears incognito as Jerry’s marvelously tacky sister – performing an even more riotous rendition of the aforementioned ‘Dreams’ number. Ultimately, Jerry and Lucy find true love where they ought to have been looking for it all along – in each other’s arms; a forgone but nevertheless fitting end to one of the all time great comedy classics. 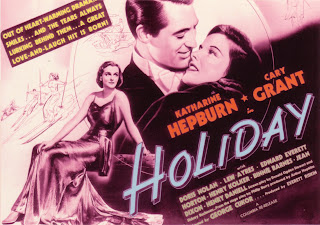 Director, George Cukor’s Holiday (1938) is an anti-capitalist tale of free-thinker Johnny Case (Grant) who finds himself almost accidentally betrothed to a millionaire's daughter, Julia Seton (Doris Nolan). Despite Johnny’s lack of wealth (he hasn’t the proverbial ‘pot’ to his name) Julia’s family embraces the marriage – that is, until Julie’s father desires to have Johnny assume responsibility in their family business.


The request forces Johnny to rebel and take a ‘holiday’ with the black sheep of the family, sister, Linda (Katharine Hepburn). Linda’s accomplice in this matter is her drunken brother, Ned (Lew Ayres). Both Linda and Ned have had their artistic flair beaten into the dust under the weight of familial responsibility and both sympathize with Johnny’s desire to escape. With the ‘not so subtle’ aid of friends, Nick (Edward Everett Horton) and Susan Potter (Jean Dixon), Johnny eventually makes up his mind. 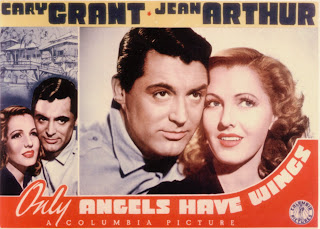 Only Angels Have Wings (1939) is director Howard Hawks’ dark and brooding tale of the short shelf life affixed to South American mail plane pilots. While waiting for her embarkation to parts unknown, American ingénue Bonnie Lee (Jean Arthur) is detained at a small landing strip. The pilots there have almost sworn themselves to a suicide pact by delivering the mail across dangerous foggy mountains.


Geoff Carter (Grant) is the lead flyer – a rough and tumble by-the-seat-of-his-pants man’s man who is at once cold and aloof. After one of their own meets with a fiery end, the rest of the crew’s perceived lack of understanding forces Bonnie into a direct conflict with Geoff; a conflict heightened when Geoff’s old flame, Judy MacPherson (Rita Hayworth) shows up to pitch a little woo on the side – even though she has her own husband in tow. Hawks gets to the grit and adventure of the piece without getting mired in its seriousness. 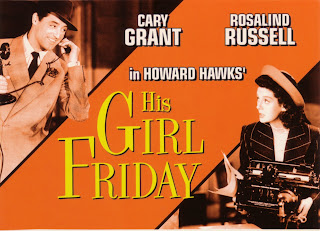 Hawks’ His Girl Friday (1940) - a remake of The Front Page - recasts the part of Hildy Johnson as a woman thereby creating one of the most sublime ‘battles of the sexes’ romantic comedy ever conceived for the movies. Hildy (Rosalind Russell in her best role) is the ex-wife of Walter Burns (Grant), a ravenously enthusiastic newspaper editor who still thinks he can win back Hildy’s heart. One problem: Hildy’s become engaged to Bruce Baldwin (Ralph Bellamy, in a variation on the sort of ‘long suffering’ foppish roles that made him a solid second string actor).

Not that Walter will let a little thing like love with a tax attorney stand between him, Hildy and the greatest scoop of either one of their careers. After all, when Walter aims high, he does tend to hit low…at least below the belt. Peppered in great vignettes and rapid fire overlapping dialogue that is so incendiary it’s a wonder how many of the gags got past the censors, His Girl Friday is an untouchable among screwball classics – a genuinely inspired bit that never ceases to entertain. 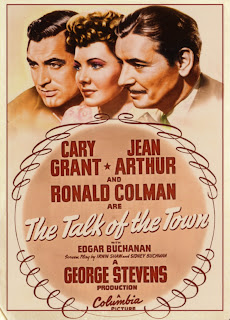 George Steven’s The Talk of the Town (1942) is a film of various shadings. It begins in earnest as a prison break adventure; mutates into a romantic screwball comedy; is transformed into a mystery/suspense thriller, before miraculously ending on a high note of distinct melodrama. All these elements are kept in check in a film that is quite compelling and remarkably fresh in both its deportment and accoutrements. Grant is cast as Leopold Dilg, a presumed arsonist who escapes his prison term and takes up refuge at the country estate of one Nora Shelly (Jean Arthur). The trouble is that Nora has rented the property to Michael Lightcap (Ronald Colman) a law professor recently appointed to the Supreme Court.


Unaware that he is housing a fugitive, Michael and Leopold (pretending to be the estate’s gardener, Joseph) become the best of friends until realization and propriety demand of the former that he do the right thing. Unwilling to see his friend go to prison, Michael and Nora set out to hunt down the real culprits and clear Leopold’s good name.


Columbia’s commitment to DVD continues to be a mixed blessing and these transfers are no exception. Although Only Angels Have Wings and His Girl Friday were sourced from prints given a thorough restoration effort before the studio reversed its policies on providing stellar transfers of their classic titles, the rest of the films in this box range in quality from passable to below average. The worst looking of the lot is Holiday – odd, since it is blatantly advertised on the front jacket as “first time ever on DVD!” 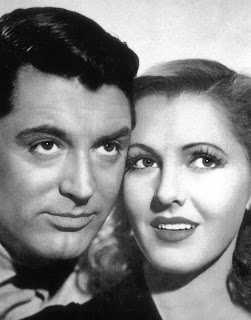 One would think that that moniker deserved a better looking transfer. On Holiday then, contrast levels are quite weak. There are no deep blacks or clean whites but variations of tonal gray. Film grain is intense. Often the image appears slightly blurry or out of focus. Fine details are generally lost under the haze of age related artifacts.


Since only Holiday was new to the home video market, one might expect that transfers on The Talk of the Town and The Awful Truth would have been made spiffy for this box. At least, on The Awful Truth some attention seems to have been paid between this transfer and its original release.


The original was plagued by quite a few age related artifacts (scratches, dirt and chips) that have been greatly reduced on this newer minting. Contrast levels too appear to be a tad more refined on this version with deeper blacks.
The image remains softly focused in spots – but again, compared to the first release – looks a shade better than it did before. However, The Talk of the Town has been given NO further consideration this time around. The edge enhancement and digital shimmering that plagued the original release has been directly imported here, along with the softly focused image and considerable film grain in spots.


Extras are skimpy at best. Each disc is given a featurette that boils down to a few choice comments made by various film critics, interspersed between scenes and sound bytes from the film. There’s also a short featurette on Rosalind Russell (which is a direct import from the original ‘His Girl Friday’ disc), as well as an all too short bio on Cary Grant.

VIDEO/AUDIO
The Awful Truth 3.5
Holiday 3
Only Angels Have Wings 4
His Girl Friday 4.5
The Talk of the Town 3.5