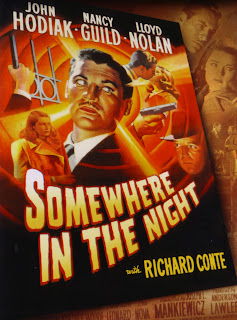 Joseph L. Mankeiwicz’s Somewhere in the Night (1946) is a film noir pot boiler elevated to almost ‘A’ list status by the central performance of John Hodiak as George Taylor. Taylor awakens in a Honolulu hospital without any recollection of his past. Piecing together his own history from bare snippets of a letter he discovers in his wallet, Taylor returns to San Francisco to reclaim his life.

He is prompted by a note written by friend, Larry Cravat, who instructs George to go to a bank and withdraw five thousand dollars. But there are problems at the bank and George escapes before any questions can be asked. In his search for Larry, George stumbles across nightclub chanteuse, Christy Smith (Nancy Guild)…or is it Mrs. Larry Cravat?

It seems that no one will help poor George figure out his past. Perhaps that’s because it involves a three old year murder case and heist horribly gone wrong before the war – neither of which George can remember to save his live.

The rest of the performances in this film are pretty much par for the course of a standard B-film noir, but Hodiak is selling his bit at A-list prices. He delivers a solid, compelling and rather sympathetic characterization that keeps the film afloat when plot devices seem to fall short of expectation. Mankiewicz, a master storyteller, keeps up his end with a pace that’s taut and fast moving.

Fox Home Video’s DVD is fairly admirable. Save a few minor instances where grain briefly intrudes, the bulk of the print is clean and very nicely contrasted. The gray scale is bang on. Whites are generally clean. Black levels are deep. The audio is nicely represented at an easy listening level. The only extra of merit is an audio commentary that is thorough and informative.