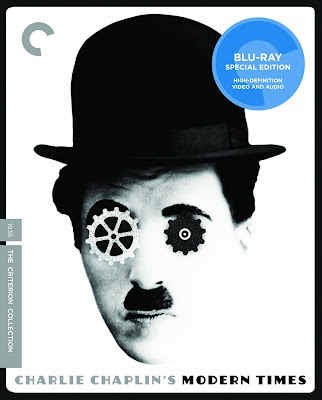 There are few who would dispute comedian extraordinaire, Charlie Chaplin as one of the great cinematic artists of the 20th century. A modest congenial man in real life, Chaplin's on-screen persona of the gregarious ‘little tramp’ emerges as something of a triumphant everyman, besought and nearly beaten by circumstance, yet always with that spark of defiance burning within.

In Modern Times (1936), Chaplin is a nameless factory worker who, after going mad in a mechanized world, takes up with a penniless gamin (Paulette Goddard) on a lark about town. She convinces him that simplicity of being within the ever-changing complexity of an industrialized society not only has merit, but is absolutely essential to the preservation of his sanity.

The factory sequence that opens the film owes much of its styling and execution to Rene Clair's A nous la Liberte (1931). Chaplin is seen as a common labourer tightening bolts on an assembly line. Gradually, the overbearing demands of his boss (whom Chaplin modeled at least physically on the likeness of Henry Ford - a personal friend) and his work cause Chaplin to assume the persona of Shakespeare's Pan from A Midsummer Night's Dream. Running amuck and tightening everything in the factory from his co-worker's nipples and noses, to the rather obviously large buttons on a secretary's pants, as well as the blouse of an unsuspecting Wagnerian female walking down the street with two oversized buttons fixed approximately where her breasts hang, Chaplin is taken to a mental asylum.

Upon his release, he is penniless and unemployed. A passing truck carrying lumber accidentally drops its warning flag and the little tramp, ever the helpful soul, picks it up in an attempt to return it to the rightful owner. Instead, the tramp finds himself suspected of being a Communist sympathizer after he inadvertently joins a union march down main street, still with the truck's flag in hand. Arrested, but ultimately released after accidentally snorting cocaine while in prison, Chaplin meets up with a penniless gamin. The two are acquainted, but only platonically.

She brings out the best in the tramp and he, in turn, opts to do right by her kindness by securing a job as a night watchman at a local department store. Smuggling the gamin into the bedding department so she can have a proper night's rest on a real bed, the tramp also encourages a trio of would-be robbers to enjoy the spoils available in the store. The store owners arrive and arrest the gamin and robbers.

Fired, the tramp endures further random acts of humanity's unkindness. The gamin, however, has escaped from prison and found the tramp a job as a singing waiter in the saloon she is also working at under an assumed name. Having lost the lyrics to his debut song, the tramp adlibs gibberish in place of words; brilliantly acting out the song's scenario and easily stealing the show. The police arrive to apprehend the gamin but the tramp thwarts their arrest. In the final sequence, the tramp and the gamin are seen walking hand in hand down the open road to an uncertain, though undoubtedly brighter, future together.

It goes without saying that Chaplin is a brilliant satirist. In reviewing his movies, however, one is often struck by the sheer simplicity and clarity in his narratives. Chaplin's distaste for the dehumanization of men in a mechanized world is often misperceived as his general distaste for capitalism. Yet, the tramp and the gamin in Modern Times show no disgust during their romp inside the lavishly appointed department store. They relish the high life - however briefly. If anything, they recognize the significance of capitalism's spoils but in the end, realize that they can just as easily get along without them.

In the years that followed the release of Modern Times, Chaplin would be misperceived for such commentaries as a Communist sympathizer. By the mid-1950s he was forced into exile by the United States government to live abroad. To be certain, films like Modern Times are critical – perhaps rightfully so – of the shortcomings of the capitalist model that places profit above the innate value of human beings. As another Charles (Manson) once said, “The truth is ugly, so we put our judges in prison.” Chaplin proved unequivocally with Modern Times that to judge a situation as unacceptable is decidedly not the same as condemning the system that fosters it.

Criterion Home Video debuts Modern Times on Blu-ray in a transfer at long last worthy of the film. In 2001, Warner Home Video and MK2 Productions gave us an extra packed 2 disc DVD minted from a European based PAL hi-res video transfer. However, in converting the transfer to NTSC North American broadcast standards the video quality suffered from severe chroma bleeding and a barrage of problematic digital anomalies.

I am pleased to report that the Criterion Blu-Ray - also sourced from MK2's fine grain materials - has corrected 99% of the shortcomings from this previous DVD release.

We get a near pristine B&W image with subtle nuances in the gray scale and a quantum leap forward in fine detail and film grain that actually looks like grain and not digital grit. The briefest instances of edge enhancement crop up now and then but overall do not distract. There is quite simply nothing to squawk at here and fans of Chaplin and this film are in for a genuine treat with the Blu-Ray offering. The audio is mono and has been cleaned up considerably for this release.

The original MK2 featurette - Chaplin Today - is included on the Criterion Blu-ray, along with an exclusive audio commentary by David Robinson. There's also a wonderfully composed 'visual essay' by Jeffrey Vance, featuring still photographs of Chaplin at work on the set as well as stills from three deleted sequences from the film that no longer exist. A few short amateur films by Chaplin and Modern Times' theatrical trailer round out one's overall enjoyment of this buoyant classic. Highly recommended!