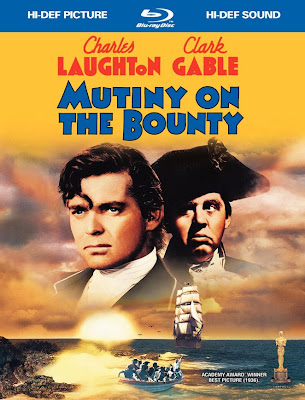 The Oscar winning sea epic that forever set a standard for all those that followed, Frank Lloyd’s Mutiny On The Bounty (1935) is a sprawling, yet intelligently written and character driven melodrama about the most infamous revolt in Maritime law. One of the many brain children of MGM producer Irving Thalberg, the film is an exceptional example of a major studio production set forth with all its pistons firing. In reality, the filmic bounty shares very little historical accuracy with her celluloid counterpart. Still, the best of Hollywood films excel when there is a clear cut good vs. evil battle for the human spirit and Mutiny on the Bounty is no exception.

For starters, while the real Capt. Bligh was undoubtedly a disciplinarian (as any good captain of his vintage might well have been) two of Bligh's 'tortures' depicted in the film (one, Keelhauling, the other flogging) never actually happened aboard the real vessel as she sailed to Tahiti. In fact, the only two deaths aboard ship had absolutely nothing to do with Bligh. One seaman died of scurvy (a common disease in those days), while another died of alcoholism. But that doesn't make for very engaging copy, and it certainly doesn't afford Fletcher Christian the opportunity to become a heroic figure in the embodiment of everybody's movie king - Clark Gable.

Gable is Fletcher Christian – first mate to the tyrannical William Bligh (Charles Laughton). At first loyal to his captain, Christian eventually grows weary, then suspect, of Bligh’s intensions. The first half of the film plays fast and loose with the question of whether or not Bligh is merely asserting his authority to maintain control of the ship or has he become a brute sadist who relishes discovering new ways of pummelling the spirit of his men?

By the film's second half, the screenplay by Talbot Jennings, Jules Furthman and Carey Wilson has veered about as far off the map as possible to deliver a typical ‘Gable’ vehicle pumped full of machismo with style, panache and rousing adventure to boot. MGM’s attention to surface sheen and gloss serves this story well enough.

Gable is roguishly handsome as the central mutineer, though far removed from the physicality of the real Fletcher Christian. Gable's one concession for the role was that he shaved his trademark pencil moustache after being informed that the British fleet had outlawed facial hair.

Popular second string leading man, Franchot Tone gives a poignant performance as Midshipman Roger Byam; a man wronged by his captain, who does wrong against him, then reforms to carry on another day.

The film's narrative is balanced around one central event - the Bounty's arrival in Tahiti to collect and bring back breadfruit plants to England. Upon arrival to the island, Christian falls in love with native girl, Maimita (Mamo Clark). It is through her innocence that Christian's relatively aloof exterior melts. After Christian and his fellow mutineers set Bligh and his officers adrift on open waters, they return to Tahiti to take up with the sweethearts they left behind. But a British inquest forces the survivors back home to a trial and imprisonment.

This film clearly delineates Laughton's Bligh as a villain of ‘zero’ redemption – a miscalculation that proves problematic in the end when Laughton is reinstated by the British who seek to prosecute and put to death each and every mutineer. In this clear cut banality of ‘good’ vs. ‘evil’ – evil arguably wins, remarkably and quite distinctly.

Yet the film's narrative is clearly one sided, and that side remains with the mutineers, as Christian delivers his impassioned speech about starting over on Pitcarn Island with the purity of its native culture intact. In reality, the mutineers who stayed in Tahiti quickly degenerated into a rabble of murderous thugs that all but wiped themselves out of existence in a matter of a few short months.

But who needs a history lesson when there is so much sumptuous scenery to take in? Arthur Edeson's cinematography evokes the resplendent escapism of the tropics with surreal beauty. Gable is at his stoic masculine best - cutting a dashing figure in his white pirate's sheath, undone to his navel, hair slicked into a tight pony tail and looking as though he may either kiss or kill the competition into submission at any given moment. Laughton's performance ranks amongst his best - although in truth I cannot recall a single 'bad' performance that the actor ever gave. His Bligh is an effeminate sadist who fiendishly delights in the self destruction of his mutineers.

At Oscar time Mutiny on the Bounty took home the coveted Best Picture award - although oddly enough it lost in just about every other major category it was nominated in. Despite numerous remakes in Technicolor and widescreen, it's this 1935 spectacle that can still hoist the Jolly Roger to swimmingly grand heights of cinematic pleasure.

So, prepare to set sail once more - this time in grander style still as Warner Home Video bows a Blu-Ray worthy of rediscovery. Although original film elements continue to suffer from age related artefacts, dirt and scratches - particularly during the storm sequence - the image quality on this Blu-Ray easily bests Warner's previously issued DVD where one might most expect it to.

The audio remains mono, but nicely cleaned up. The one shortcoming of this disc is that it comes with NO new extra features. We get the same vintage featurette on Pitcarn Island and two theatrical trailers - one for this film, the other for its disastrous Marlon Brando remake from 1962.

Warner has padded this disc's packaging with a gloss 32 page booklet that superficially covers the making of the film. While I'm not particularly a fan of this sort of reissue, I do hope that advanced sales of this title will encourage Warner Home Video to reconsider giving us more great vintage B&W classics remastered in 1080p in the near future. Do I hear takers for Marie Antoinette (1938), Romeo & Juliet (1936), The Prisoner of Zenda (1937), Captains Courageous (1937), Pride and Prejudice (1940), Mrs. Miniver (1942), The Great Ziegfeld (1936), Random Harvest (1942) et al? My list of 'must haves' is much longer and equally distinguished!