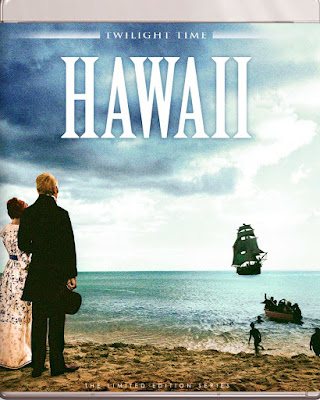 David M. said…
That's the only review I've seen of any Blu-Ray that addresses the existential problem of Blu-Ray releases of movies in 2016: why release a Blu-Ray of anything? I have a serviceable "Hawaii" DVD (it's anamorphic, by the way, and includes an interesting 10-minute featurette not included on the Blu-Ray) and the Roadshow version on laserdisc. I saw this movie as a boy, with my mom, and I've always enjoyed it for what it is. I should be the target market for a "Hawaii" Blu-Ray, but why do I need the Twilight Time effort? For the homemade commentary? Blu-Ray was sold to the public (and not very successfully) as the ultimate home video format. The whole point of Blu-Ray was to provide not just the best possible version of a movie, but an impressive experience at home with that movie. We're also supposed to feel like there will probably never be a better way to watch that movie at home, as we did with laserdisc and then DVD before the Hi-Def formats came in. By all of these standards, "Hawaii" on Blu-Ray is a failure. I'm enjoying my DVD library, built in the previous decade which I believe should be considered the golden age of home video, when the manufacturers put thought, effort, and money into restoration, excavation, and packaging. If upgrading to Blu-Ray, which has already slowed to a crawl, is going to be as pointless as it is in the case of "Hawaii", who in their right mind is going to be doing it? Besides me, selectively, of course. Great review, Nick.
February 15, 2016 at 7:47 PM