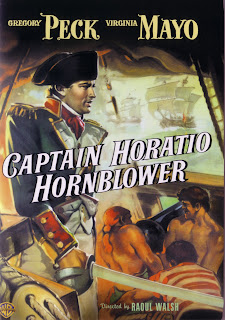 Adapted from C.S. Forester’s exhilarating nautical saga Raoul Walsh’s Captain Horatio Hornblower (1951) is a colorful and thrilling sea epic with masterful performances throughout. Like Clark Gable’s Mutiny on the Bounty or Errol Flynn’s The Sea Hawk, this film is an exercise in recreating, then fictionalizing historic maritime events. The sea is as much a character as any of flesh and blood; a compelling master representing both vast opportunities for men to prove themselves, while coming perilously close in facing their own mortality.

The tale begins in earnest with the secretive mission of the HMS Lydia, tall ship belonging to his majesty, the King of England and commanded by Capt. Horatio Hornblower (Gregory Peck). Presumably lost at sea, stricken with scurvy, and, with the crew’s morality ebbing to an all time low, Hornblower is forced to uphold his 2nd Lt. Girard’s (Terence Morgan) threat of flogging a crew member who has been derelict in his duties. Yet, Hornblower makes it clear that the exercise is conducted only as a matter of form and furthermore urges his officers to temperance when dealing with the sailors working under them.

It seems that the Lydia is carrying arms to a secluded Spanish Fortress controlled by the tyrannical Don Julian Alverez (Alec Mango) – El Supremo to his friends and enemies. He has ample quantities of both. Hornblower quickly realizes that Don Julian does not respect the British monarchy. His is a blood-thirsty conquest to defeat Napolean’s fleet and conquer the Americas. Bordering on insanity, Julian has nevertheless correctly assessed that the British will align themselves with whatever means necessary to defeat France.

However, Hornblower’s mission is interrupted by the arrival of Lady Barbara Wellesley (Virginia Mayo); sister to the Duke of Wellington. Forced to evacuate Panama after a plague of yellow fever, Barbara convinces Hornblower to take her on as a paying passenger, much to his own chagrin and personal dissatisfaction. After all, Hornblower reasons, ladies are a distraction – one he is quite capable of living without.

The rest of Walsh’s seafaring adventure treads lightly between exhilarating action sequences and moments of fiery feuding between Barbara and the Captain until both cannot fathom a life for themselves without the other in it. This is a brilliantly conceived film with stellar performances. It is definitely worth a second glance on DVD.

Warner Home Video’s DVD is a sumptuous experience; glowing in glorious Technicolor with rich robust and vibrant hues, impeccably rendered contrast levels, and, very refined details throughout. Flesh tones are accurately presented. Blacks are deep and solid; whites, generally clean and bright. Occasionally, matte process shots exhibit a tad more film grain and age related artifacts than the rest of the footage. The audio is mono but adequately restored for a thoroughly satisfying listening experience. Tragically, there are NO extras. Recommended!