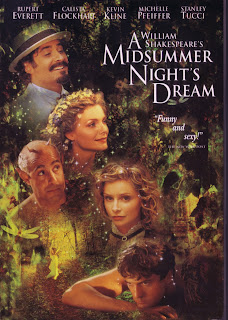 Michael Hoffman’s A Midsummer Night’s Dream (1999) is a rather delicious interpretation of William Shakespeare’s immortal comedy of errors. The film begins in earnest with the bard’s romantic struggle of wills between Demetrius (Christian Bale) and Lysander (Dominic West) for the affections of the fair – though troubled – Hermia (Anna Friel). Hermia desperately loves Lysander, though her father will have no one but Demetrius for a son-in-law. On the outs of this lover’s triangle is Helene (Calista Flockhart), whose love is true to only Demetrius.

Determined to follow her own heart, Hermia plans escape from her small town prudery and patriarchal conventions with Lysander in tow under the cover of night. Unfortunately, they are found out by Demetrius who pursues them into the woods, followed in turn by Helene on her bicycle.

But what are the fates of mere mortals when cast into the mischievous winds of King Oberon (Rupert Everett) and Queen Titania (Michelle Pfeiffer)? Oberon’s petty officer of larceny, Puck (Stanley Tucci) has decided upon a wickedly playful course of action for the confused lovers.

He will bless them all with the fragrant petals of a flower that, once inhaled causes the person to fall madly in love with the first person they see shortly thereafter. Puck further complicates the night’s entertainment by transforming one of local town minstrels, the aptly named, Nick Bottom (Kevin Kline) into an ass whom Titania affectionately woos, having accidentally sniffed the flower herself.

Whimsical fantasy of this sort effectively went out with the age of enlightenment; yet there is much to admire in director Hoffman’s handling of these outdated comedic elements. The camera maneuvers freely throughout the stylized woods; an effective disembodiment from the action – surveying all, yet making no distinct comment on any. As an audience, we are allowed to bask in the sustained and quite often charming performances from all the principle actors of which Kline and Flockhart are having the most immense good time.

Be forewarned: Fox Home Video has two competing versions of this film currently out on DVD. One is anamorphic; the other is not! The packaging on both editions is virtually identical unless you read the back specifications. One will merely say “widescreen format” while the other will say “enhanced widescreen.” Naturally, the latter is preferred.

Colors are fully saturated, bold and vibrant. Blacks are deep and solid. Whites are pristine. Occasionally, edge enhancement intrudes, though it never distracts. Fine details are evident throughout. The audio is 5.1 Dolby Digital and delivers an enveloping spread across all channels. There are no extras on either edition.