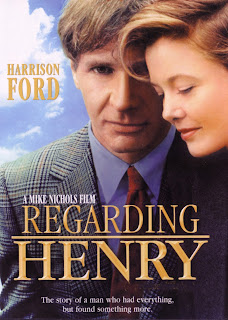 Mike Nichols’ Regarding Henry (1991) is the bittersweet story about one man losing everything in order to find the only thing that matters - himself. Henry Turner (Harrison Ford) is a prominent attorney and chief headhunter in medical litigation cases for insurance companies. He’s arrogant and misguided in his profession – crusading to deny the little guy expenses needed to recover from illness. But that’s all about to change one fateful night when a liquor store robbery goes bad.

The robbers accidentally shoot Henry in the head.
Henry’s life threatening wound leaves him with permanent brain damage and complete amnesia about who he is. Henry’s wife, Sarah (Annette Benning) is committed to his recovery. Together with their young daughter, Rachel (Mikki Allen) and the aid of his physiotherapist, Henry begins the long road to wellness. Although everyone believes that Henry will someday again practice law again, the profession may no longer hold Henry’s fascination – he is now more the man than the monster.

Nichols’ direction is stoic, yet satisfying. He intentionally slows the narrative pacing after Henry’s near fatal accident, forcing the audience into rehabilitation mode along with the Turners without ever making us wish for a return to the fast lane. Ford’s performance is a variation on the good time Charlie we have seen him pull at least a half dozen times before. Yet, there is something quite tender and unexpected in his post-amnesia and in the on screen chemistry between him and Benning. In the end, it’s not only Henry that finds his way back to a life less ordinary, but the audience – grateful for the journey without the obvious complications.

Paramount Home Video’s DVD is rather middle of the road; anamorphic widescreen but with dated, slightly faded colors; weaker than expected contrast levels and a considerable amount of film grain and age related artifacts throughout. Occasionally, pixelization breaks apart fine details. Otherwise, the overall presentation is relatively smooth. The audio is presented in its original 2.0 surround and a Dolby Digital remix. Both mixes sound almost the same. There are NO extras.