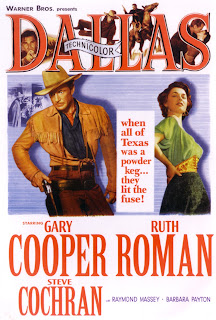 Stuart Heisler’s Dallas (1950) is a rather laconic and non-sensical western melodrama; romanticized in glowing Technicolor but without much substance to sustain its running time. The film stars Gary Cooper as ex-confederate solider and wanted man, Blayde Hollister. Seems Hollister was framed by an outlaw for the torching of a home that resulted in two deaths.
Escaping repeated attempts at incarceration and, during the film’s preamble, faking his own death with the aid of Wild Bill Hickcock (Reed Hadley), Hollister next employs the stoic would-be newly appointed marshal of Dallas, Martin Weatherby (Leif Erickson) as his cover in pursuit of the man who framed him, Will Marlow (Raymond Massey). Hollister and Weatherby switch clothes and identities – a rouse made problematic when the two men arrive at Weatherby’s fiancée, Tonia Robels’ (Ruth Roman) Spanish hacienda.

Inexplicably, and without much coaxing, Tonia falls in love with Hollister – leaving Weatherby to pursue a reprieve from the governor for Hollister’s outstanding warrant. Meanwhile, Will Marlow and his brother, Brant (Steve Cochran) are plotting another frame-up – one that will see Hollister hang unless his innocence in the first crime can be proven.

Heisler’s direction is solid and smooth. But he’s hampered by John Twist’s convoluted screenplay that starts off as a buddy/buddy scenario, then jettisons that idea for an improbable romance, and finally debuts as a shoot-‘em-up/pony chase through the moonlit woods that ends predictably and prematurely. Cooper plays his hand as though he were ‘Mr. Deeds Goes Out West’, while Roman is unbelievable – if stunningly beautiful – as the Mexican wild flower whose heart cannot be reconciled between two lovers.

Warner Home Video’s DVD exhibits near reference quality mastering. The Technicolor simply glows – stunningly and beautifully. Rich hues, fully saturated – except in the briefest of moments, usually transitional fades and dissolves – with solid contrast levels and a very minimal amount of age related artifacts. Blacks are deep and velvety. Whites are generally clean. Truly, there is not much to complain about in the transfer. The audio is mono but nicely restored. There are NO extras.