THE WRECK OF THE MARY DEARE (MGM 1959) Warner Home Video 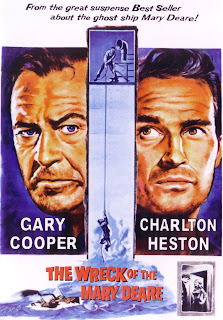 Michael Anderson’s The Wreck of the Mary Deare (1959) is an engaging melodramatic thriller that stars Charlton Heston as salvager, John Sands. While on a routine voyage one stormy night, Sands and his crew stumble across the Mary Deare – a derelict tossing about the violent sea. Determined to learn whether the ship’s cargo has survived, Sands boards the wreck but quickly discovers he is not alone. All but one crew member has remained behind; first officer Giddeon Patch (Gary Cooper).

Patch is aloof and threatening, but he does save Sands’ life. The two scuttle the Mary Deare on some perilous rocks in the middle of the ocean then return to shore to explain the situation to the authorities. But Patch lies to the coast guard – claiming the Mary Deare sank – forcing Sands to go along with the deception. Unfortunately, the company whose cargo is contained in the Mary Deare has launched a formal inquest – one that threatens to send Patch to prison for insubordination and the possible murder of the ship’s captain.

The latter half of the narrative is distilled into a rather stoic court room drama that leads Patch and Sands on a daring escape back to the wreck of the Mary Deare to gather clues and prove that Patch is, indeed, innocent of the charges of mutiny and murder.

Anderson directs the film with taut pace that buckles to a more leisurely stride during the film’s middle act. Cooper is working somewhat against type as Patch – menacing to the point of being despised, not only by Sands but also the audience. Heston is at his usual heroic best – a God amongst the mortals and providing a gallant counterpart to Patch’s closed-mouth resistance.

Warner Home Video’s DVD is fairly impressive; anamorphic widescreen with relatively rich colors. Occasionally, flesh tones appear a pasty pink or orange and much of the background information adopts a primarily sea green hue – but this is in keeping with the shortcomings of Ansco Color film stock. Age related artifacts are minimal. Edge enhancement is present but does not distract. The audio is a 5.1 Dolby Digital remix of the original magnetic tracks, sounding somewhat strident. There are NO extras.